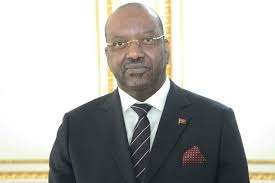 H.E Joaquim do Espirito Santo was born on July 12, 1959. He is married and the father of two children. And Career Ambassador since 2011.

Degree in Economics from Agostinho Neto University in 1984.

Master in Political Science at the School of Advanced Political Studies, Paris - France (2005).

Instructor at the National Police School “Martyrs of the Kapolo” from 1977 to 1980.

Senior Technician in the Department of Priority Companies of the Ministry of Planning (1982-1984).

Assistant of the National Economy Planning Chair at the Faculty of Economics (1983-1984).

Assistant at the Office of Analysis and Economic Studies (GAEE) of the Ministry of Foreign Affairs (1992-1993).

Director of the Directorate of International Organizations of the Secretariat of State for Cooperation (1993 - 1995).

Minister Counselor and Chargé d'Affaires at the Embassy of Angola in Mexico (2002 - 2004).

Director for Africa, Middle East and Regional Organizations of the Ministry of Foreign Affairs (2011 - 2018).

Has joined several high-level official delegations and participated in political and economic negotiations, both bilaterally and multilaterally, in Africa, Europe, Asia, and the United Nations.

Has participated in several regional and international conferences on development, peace and security, particularly in Africa.

On several occasions he was sent by the Minister of Foreign Affairs to his counterparts in European and African countries.

He has given several talks in Angola, Portugal, Great Britain and Mexico on topics of major regional and international interest linked to development, peace and security in Central Africa, the Great Lakes and the Gulf of Guinea.

Speaks fluently Portuguese and French, and reasonably English and Spanish and some African languages.